A collection of 700+ reports, case studies, articles, and conference proceedings about giving and philanthropy in Africa.

We welcome suggestions for the database, and invite you to submit additional knowledge products for inclusion here. 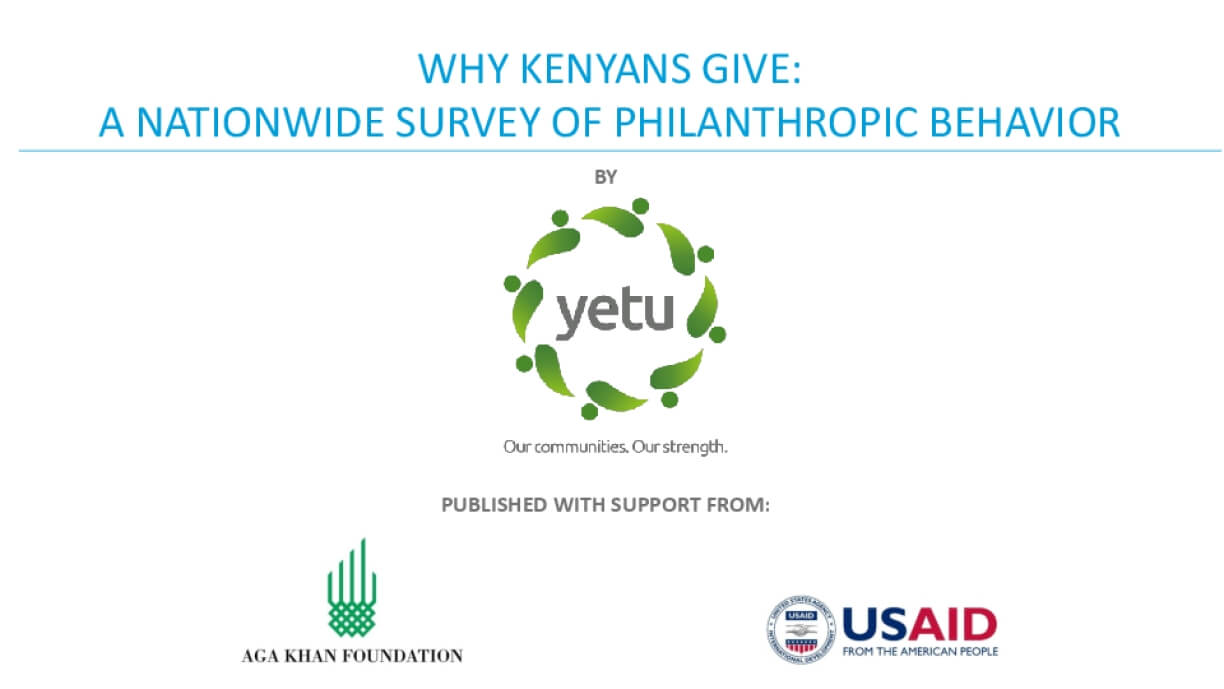 Why Kenyans Give: A Nationwide Survey of Philanthropic Behavior

DYNAMICS OF GIVING IN KENYA - WHO & WHAT THEY GIVE?93% of Kenyans are Philanthropist More people give to individuals than to organizations. When giving, cash and items (in-kind) are more popular than volunteering 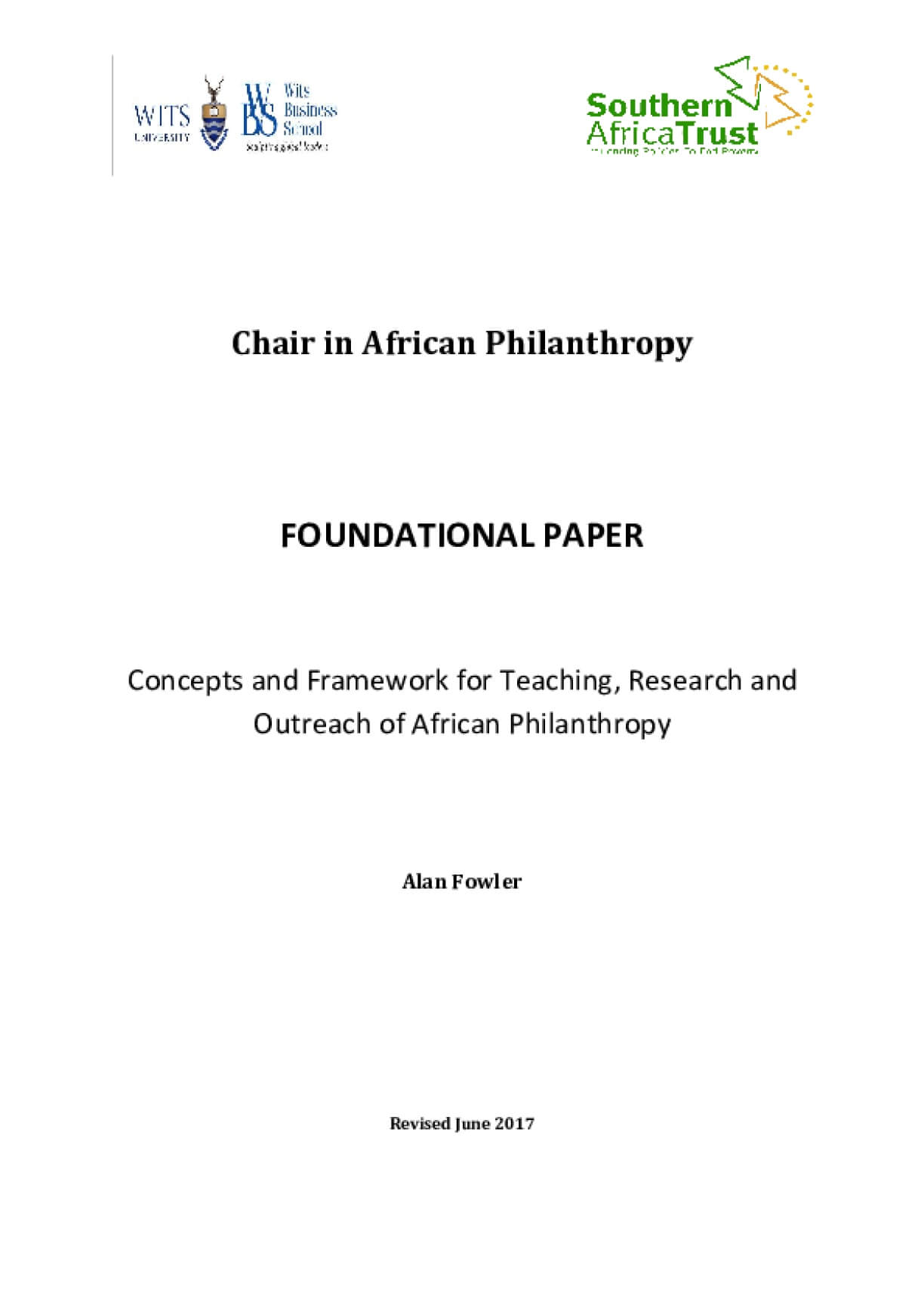 Concepts and Framework for Teaching, Research and Outreach of African Philanthropy

A paper with concise texts and extensive footnotes is not amenable to an integrating condensation or précis as an Executive Summary. Therefore, to assist readers with little time, this page offers a synopsis of key areas of substance and their sectional location allowing more directed access for those with specific interests.The pages which follow establish the scholarly foundation of new academic chair with practical intentions that a business school is meant to provide. The Chair is devoted to a topic – African Philanthropy, not philanthropy in Africa - which is seriously under-researched, poorly or prejudicially understood as 'traditional' and anti-modern as well as developmentally under-appreciated. These conditions are overlain with external vocabularies and meanings which are not adequately emanating from the continent's history and lived experience of deeply rooted pro-social behaviour of giving or 'gifting'. Hence, missing in today's discourse is a deep understanding of African Philanthropy in its own right with what it can tell us about better ways to tackle the continents many problems by building on its inherent potentials. Establishing such an 'operational' narrative is one purpose of the joint initiative between the Wits Business School and the Southern Africa trust; a story which must have relevance and traction in the lives of Africa's people.A theoretical framework in section two introduces a complexity view of social, cultural economic, political, linguistic and other processes leading to a contemporary African landscape where gifting is expressed through three institutionalised gifting practices: endogenous, exogenous and blended. An ontological approach explains this long pre-colonial, colonial and post-colonial trajectory, concentrating on a period starting around the beginning of this millennium. Readers most interested in this era could start looking at Section five. When doing so, please note that section three draws attention in to the power of words. To be ontologically coherent, new narratives often require suitable nomenclatures, in this case a choice of 'gifting' rather than 'giving' or of 'philanthropy' – understood as a practice within gifting - which is a poorly translatable term and concept in an African languages and moral philosophy of ubuntu. From a communications point of view, the choice for a distinctive terminology will continually call for justification and explanation until recognition of its narrative value for comprehending Africa's story in its own right.Since the start of the millennium, practices of gifting by and on the continent are undergoing rapid changes inviting excitement at their innovation and concern about their effects in, for example, areas of public policy, rights, universal access to public services and democratic governance. Discussing these and similar issues can be found in section six which is followed by a detailed review of local resource mobilization from private sources for public benefit derived from within the continent and its Diaspora. Across the three institutional types, uncertain but indicative estimates of their monetary value are in the order of US$ 55 – 85 billion per annum. Including the non-monetary and non-material value of gifting could take this (much) higher. Counting foreign aid, both official and private, would add the monetary by almost the same amount again.1 A planned concentration on local resource mobilisation in African gifting will contribute to reducing dependency on an aid system not known for its reliability.The concluding section seven switches focus to various issues of embedding the Chair of African philanthropy at the Wits Business School. Many ideas and content are inspired by participants at a pan- African inaugural seminar held in March 2016. This event has helped to create a 10 year profile and value preposition for the Chair at WBS in terms, for example, of the latter's Vision 2022, with guiding principles of excellence, a research-intensive agenda, a deeper business reading of African countries, transformation and more. With a tentative implementation schedule, these and other contributions must translate into a viable business model, a task which lies ahead. 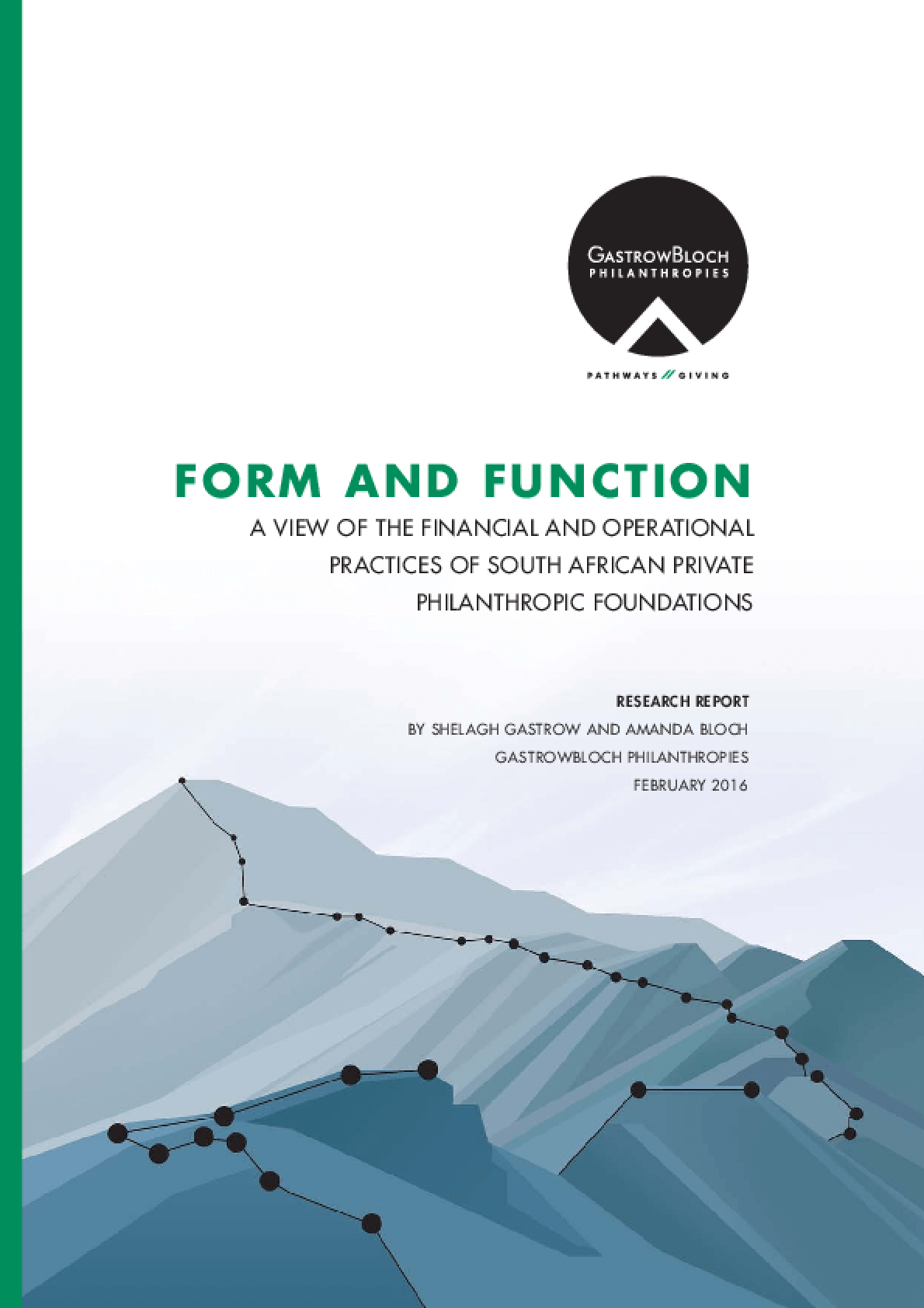 Form and Function: a view of the financial and operational practices of south african private philanthropic foundations

This report "Form and Function" reflects the research undertaken into the governance, financial management and grantmaking practice of twenty one South African philanthropic foundations during the course of 2015. This report was to assist existing foundations as well as emerging entities to benchmark their practice. Based on an extensive questionnaire, interviews were done with 21 foundations through their representatives including foundation staff as well as the founders. 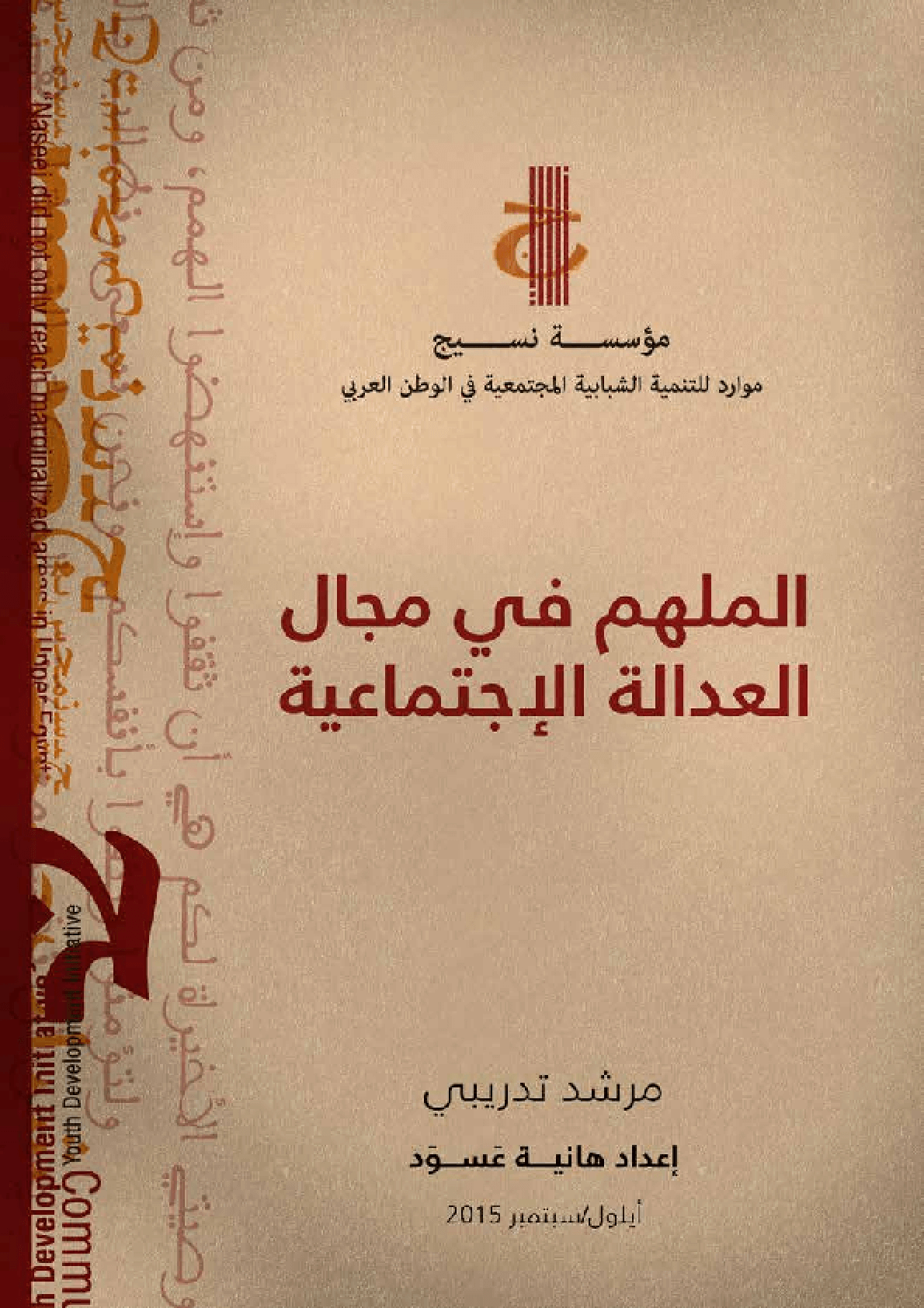 Al Mulhem ("Inspirer" in English) provides a theoretical and philosophical as well as practical framework to practitioners, activists and CSOs eager to applying Social Justice and Right based principles in their work and training workshops. 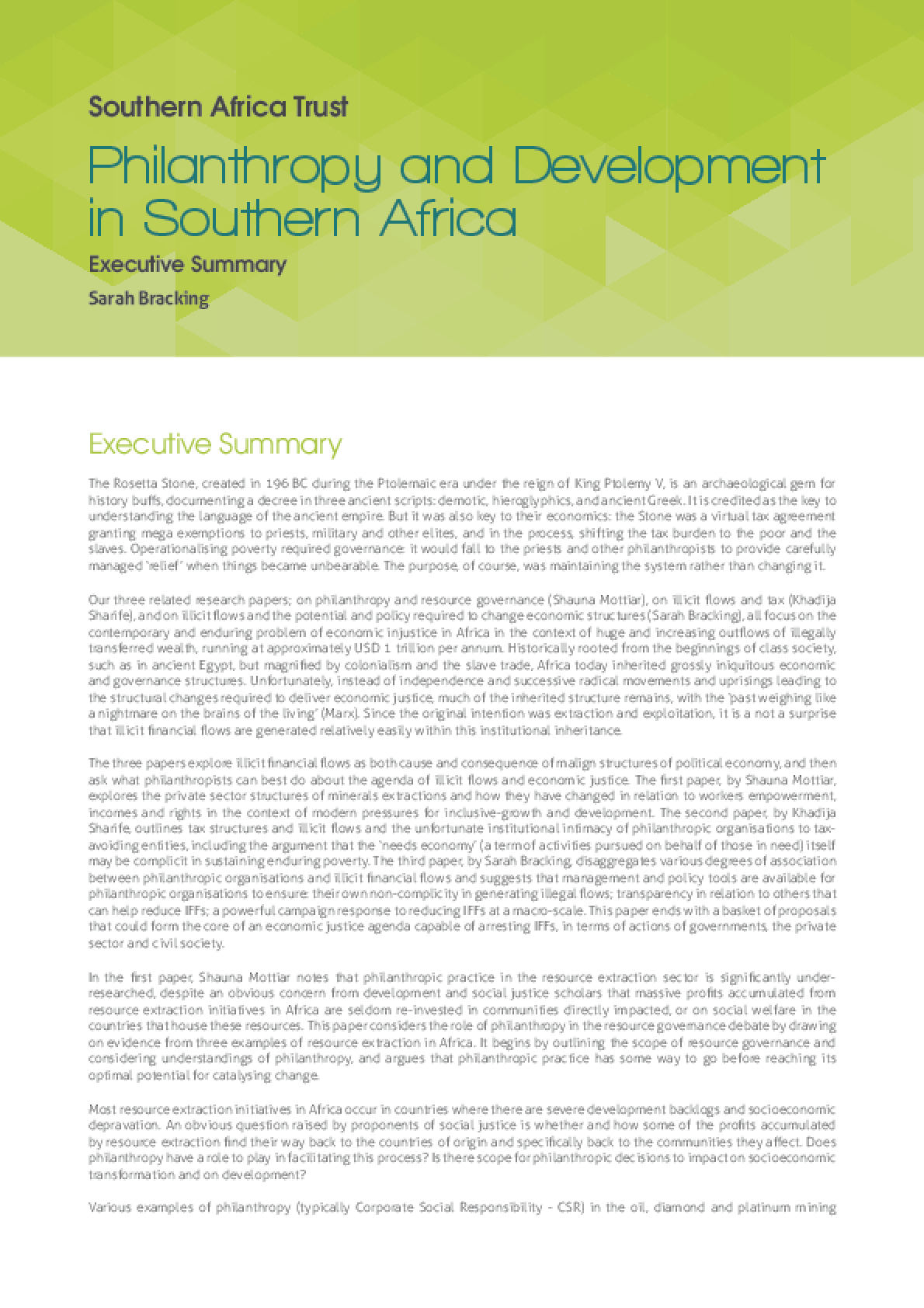 The Rosetta Stone, created in 196 BC during the Ptolemaic era under the reign of King Ptolemy V, is an archaeological gem for history buffs, documenting a decree in three ancient scripts: demotic, hieroglyphics, and ancient Greek. It is credited as the key to understanding the language of the ancient empire. But it was also key to their economics: the Stone was a virtual tax agreement granting mega exemptions to priests, military and other elites, and in the process, shifting the tax burden to the poor and the slaves. Operationalising poverty required governance: it would fall to the priests and other philanthropists to provide carefully managed 'relief' when things became unbearable. The purpose, of course, was maintaining the system rather than changing it. 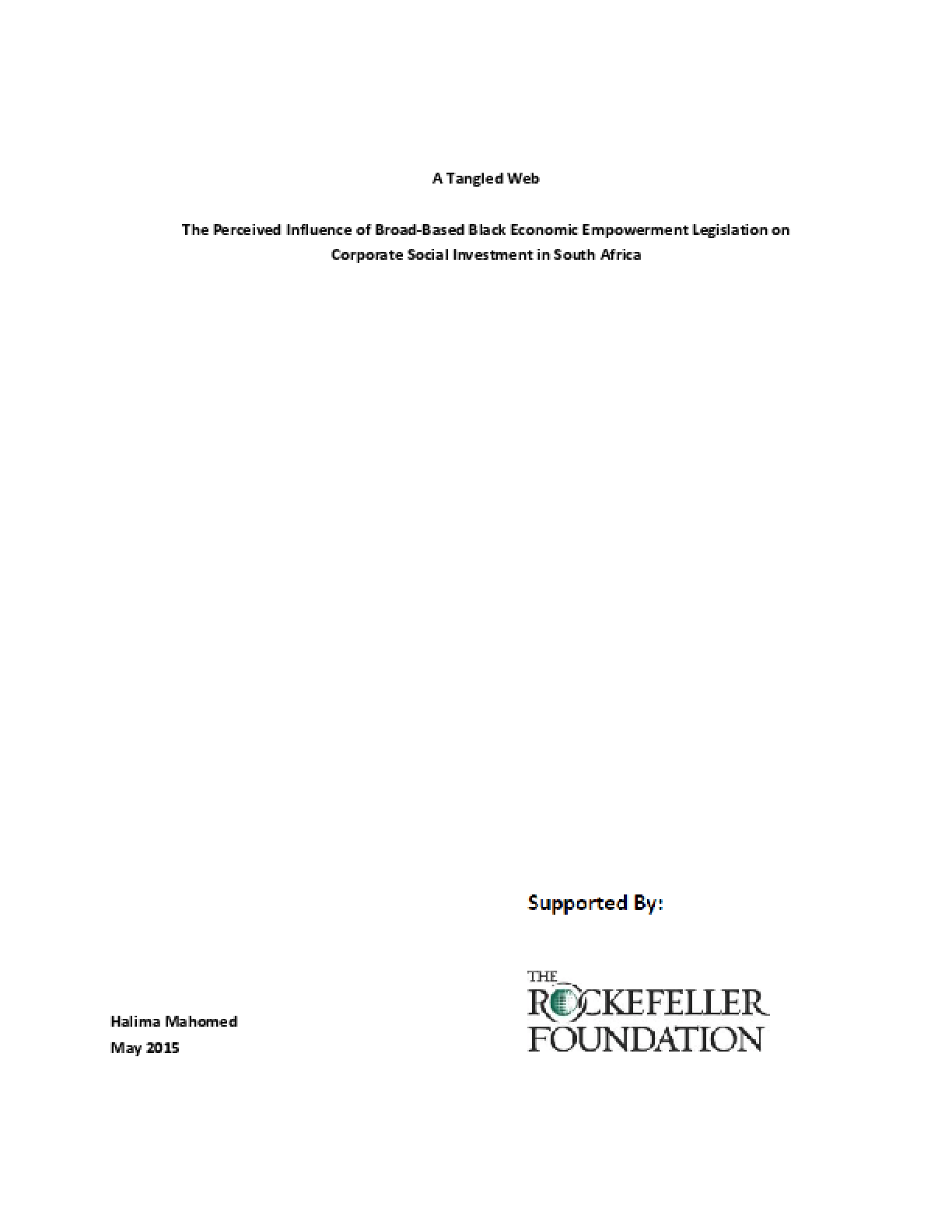 Since 2004 South Africa has had in place legislation that regulates the responsibilities of business to the transformation of society, and this regulation includes an element that relates to corporate philanthropy.To date, however, very little has been documented about the influence of this legislation on corporate philanthropy. A new research report by Halima Mahomed, A Tangled Web: The Perceived Influence of Broad-Based Black Economic Empowerment Legislation on Corporate Social Investment in South Africa, aims to partially fill this gap. The research explores the perceived influence of the legislation on issues such as the extent, flexibility and approaches to giving; highlights the limitations that arise from the structure and framework of the legislation; and interrogates some of its unintended consequences.As discussions on the feasibility of regulatory mechanisms gain traction in other places, it is hoped that this research will help to raise key issues for consideration and exploration.

Regional philanthropy experts have called for tapping into the local resources and the growing wealthy class to fund activities that boost social and economic wellbeing of society.

Blessed Is the Hand That Giveth: A Call to Philanthropy in Kenya

If Kenyans give so generously, why do we score so poorly in the philanthropic department? The reason is that while Kenyans are great at informal charity that addresses an immediate need, they are a little less successful at structured philanthropy, where money is geared towards a specific goal, usually long-term.

When the Edmond de Rothschild Foundations (EDRF) started the ERFIP (EmpoweR Families for Innovative Philanthropy) initiative in 2013, the intent was to engage with families active in both business and giving from the Global South. What has emerged is a unique platform for private philanthropists from Africa, the Middle East and Asia.

Advancing the Cause of Women Through the Arts: Interview with Sarah Mukasa

AWDF's Arts, Culture and Sports thematic grantmaking area seeks to engage with key players in philanthropy and the arts to produce alternative images and messages of African women, which challenge negative stereotypes and images. It also showcases the contributions and achievements of African women through the creation of platforms for self-expression and dialogue by African women on key issues of concern, and through skills building and technical assistance in addition to grantmaking.

How to Spread It - Salome Lemma: Amplifying African Voices

An interview with Ethiopian-born Solome Lemma who is vocal on the subject of "Africa by Africans". Sick of the perception of Africa as either corrupt and poverty riddled, or vaguely "on the rise", she has worked to open the conversation to more diverse and nuanced African voices. 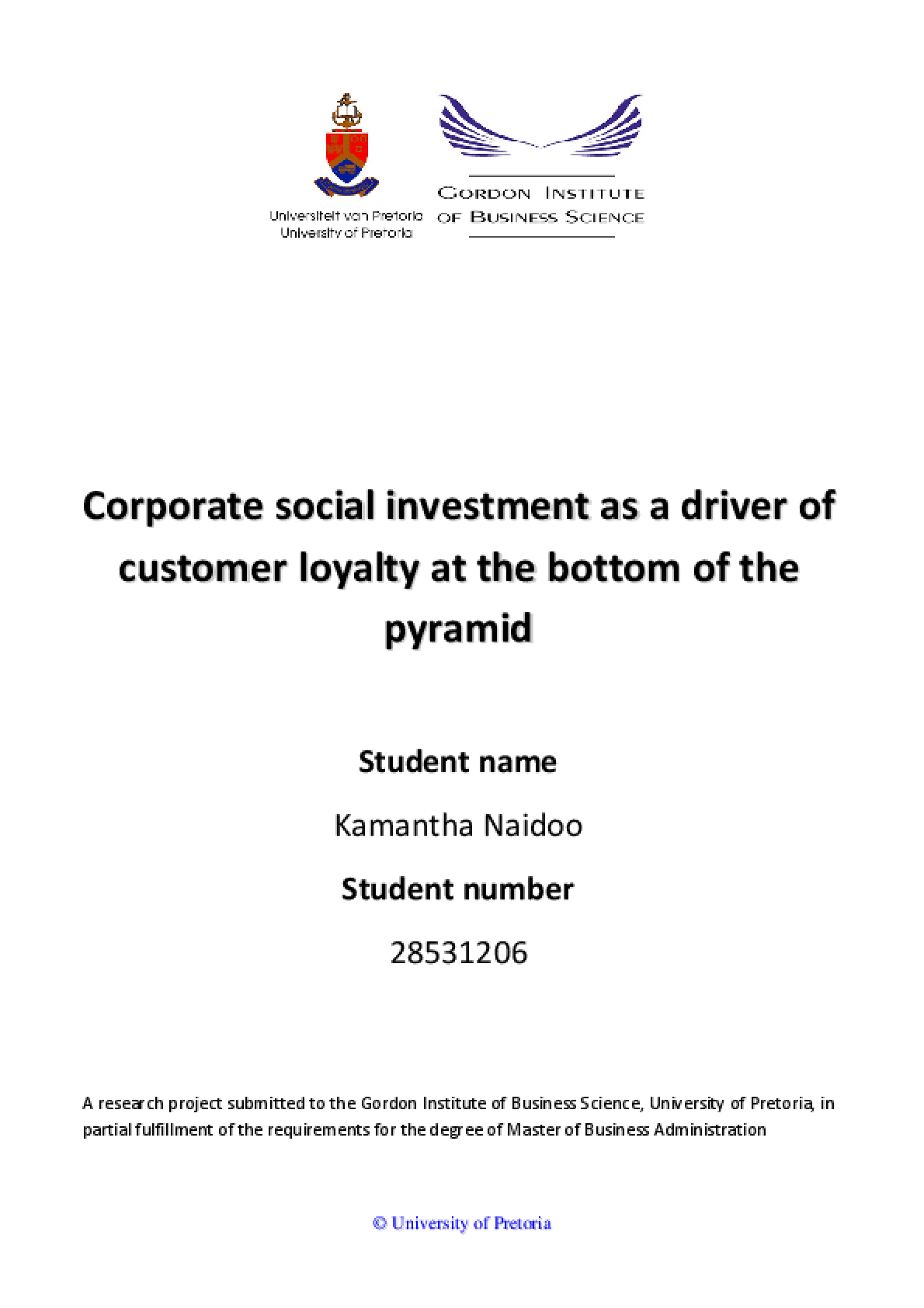 Companies spend substantial fund on SI initiatives. Expenditure of such large amounts could hold benefits for companies that go beyond their regulatory compliance. This study focused specially on how CSI impacted on consumer layalty at the bottom of the pyramid.

Use this form to customize and generate the code you need to display this content in your own environment - no programming required. The feed will inherit more specific styles, like font face and font color, from your website.

Please use the form below to provide us with your recommendation, and we'll check it out. Include your name and email address along with your suggestion just in case we need to get in touch. Thank you for contacting us.